Are you an educator with science in your curriculum? You’ll want to learn about our upcoming professional development series, open to educators from all grade levels. During our four-day series starting in October, experts will introduce you to the new science standards and explain how they have been designed and organized across disciplines and grades to provide all students an internationally bench marked science education. A key focus of the seminar will be on instructional shifts in relation to the new standards, as well as an increased understanding of the scientific and engineering practices and their impact in the classroom.

What are the new science standards and how do they impact teaching and learning?

After we introduce the Next Generation Science Standards, we will deepen our understanding and learning with focused modules on creating an effective science environment, conceptual understanding and science unit design, science literacy, plus more.

The annual EducationPlus LMS Academy focuses on the changing role of the Library Media Specialist in K-12 education. This six-session long learning opportunity will assist LMS personnel in teaching and connecting the standards of AASL, ISTE and the NETS along with the Missouri Learning Standards.

Registration is now open for all library media specialists and those interested in media literacy in K-12 education who wish to grow their professional learning network. One session of the academy is a day at the Midwest Education Technology Community Conference, which has sessions dedicated to LMS and media literacy. Educators will examine problem based activities and lessons pertaining to web and media literacy, plus explore digital citizenship and literacy curriculum resources. Best practices in copyright and fair use are important aspects to the academy discussion.

All sessions take place on Wednesdays, from 4-7 pm at EdPlus (except for the full-day at METC).

Does the state of Missouri strike you as “global” or “international”? If not, it may surprise you to learn that one of the fastest growing populations in Missouri public schools in grades K-12 is English Language Learners (ELLs). Kansas City houses the largest concentration of ELLs with nearly 12,000 ELLs in their school systems, St. Louis comes in second with nearly 10,000 and the Springfield and surrounding southwest region is third with nearly 6,000.

The top five languages spoken in these homes are Spanish-Castilian, Bosnian, Vietnamese, Arabic and Somali.

According to the Department of Education, during the 2012-2013 school year, the ELL population grew by 259% while the native English speaking population slightly declined. Last year alone, nearly 28,000 ELLs across the state of Missouri were tested for English Language Proficiency and the majority of these students are primarily in grades K-3.

How can Missouri schools best serve this growing population? The answer is constantly evolving. When a student enrolls in a Missouri public school they are given a “Home Language Survey”. If the family indicates that a language other than English is spoken in the home, the student is given a language proficiency screener. The scores from this screener determine if the student will receive direct English language instruction services. If so, the student begins ESOL (English to Speakers of Other Languages) services with a certified ESOL teacher.

A common question about teaching ELLs is “Do the teachers know all the languages of their students?” The answer is no. Thankfully, there are many methods for teachers to use without speaking the exact language of their students. ESOL programs and instruction differ across the state. Some districts pull ELLs out of the regular classroom for individualized instruction while other districts employ a “push-in” program bringing the ESOL teacher into the regular classroom. Other districts combine these methods. Co-teaching with an ELL teacher and general education teacher working together to provide comprehensible input is common while some use the Sheltered Instruction Observation Protocol (SIOP). Interactive learning strategies, such as Kagan for ELLs, are helping to boost academic achievement as well.

Missouri is also a part of the WIDA (World Class Instruction and Design) Consortium which provides many tools to help teachers who instruct ELLs. One tool is called the “Can Do” Descriptors. This chart provides a “snapshot” of what a student can do at their current proficiency level and then the teacher can get an idea of how to take them up to the next level.

The ELL students in Missouri have many linguistic/cognitive and social/economic advantages over monolingual students because they are “bi-cultural and bi-literate” (Gusman, 2015) and they add a “cultural richness” to the classroom learning environment (Cole, 2014).

To learn more about ELL programs in the St. Louis area,
contact Marlow Barton at EducationPlus.

The LearningLab is pleased to share that we have returning plus new year-long academies in place for 2015-2016. Participation in each of these academies includes admittance to the 2016 Midwest Education Technology Community Conference in February for participants! To learn more about the content, dates (each starts in October 2015 and runs through March 2016) and price of each academy, please visit our calendar or click on the infographic below. Registration is now open! 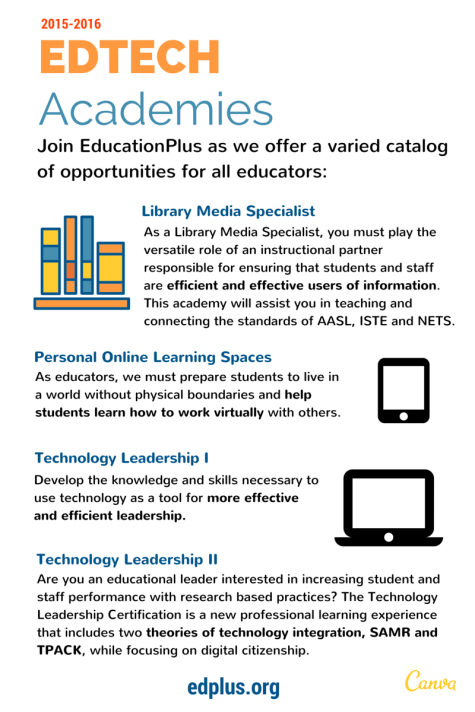 Hard to believe we’re approaching mid-July already! We have a few more edtech workshops lined up throughout the month – and there is still time to register! Learn from members of the St. Louis (and beyond!) edtech community in engaging, hands-on sessions at EducationPlus. See the registration calendar here, and keep reading to see what’s being offered before the school year starts! 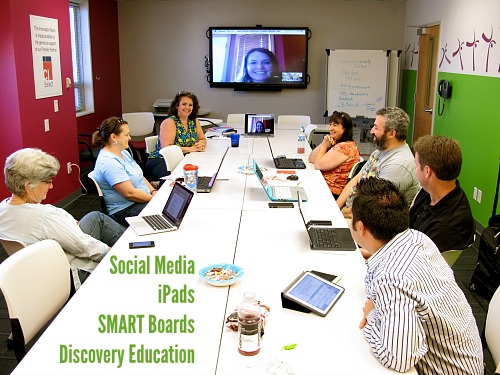 Limited is space is available in:

July 24: iPads in the Classroom

July 31: Taking Discovery Education Streaming to the Next Level