The Missouri History Museum in Forest Park and Cooperating School Districts have partnered to offer a distance learning field trip for K-12 schools during the 2011-2012 school year.  This partnership is based on utilizing the technological resources of CSD’s Virtual Learning Center and the content of MHM’s The Civil War in Missouri exhibit. 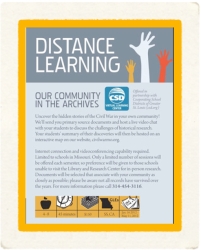 The educators at the Missouri History Museum in Forest Park will work with classes (4-8th grade) to discuss the challenges of historical research. Since it’s the 150th anniversary of the Civil War, the historians will be sharing primary sources documents from Missouri counties during that time that describe what life was like during the era. Students will be able to study the history of their community first-hand, learning the hidden stories.

Remember that according to the Show-Me Standards, in Social Studies, students in Missouri public schools will acquire a solid foundation which includes knowledge of

1. principles expressed in the documents shaping constitutional democracy in the United States
2. continuity and change in the history of Missouri, the US and the world
3. principles and processes of governance systems
4. economic concepts (including productivity and the market system) and principles (including the laws of supply and demand)
5. the major elements of geographical study and analysis (location, place, movement, regions) and their relationships to changes in society & environment
6. relationships of the individual and groups to institutions and cultural traditions
7. the use of tools of social science inquiry (such as surveys, statistics, maps, documents)

Leave a Reply, Thanks! Cancel reply