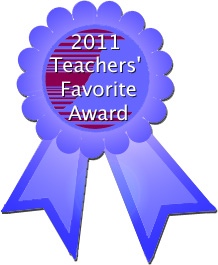 “In the spring of 2011, Berrien RESA hosted Teacher’s Favorite Awards to select the Best Content Providers for the 2010-2011 school year.

Berrien RESA has been listing content providers’ programs since 2000. As the most comprehensive database of videoconference content providers, it has been used nationally since 2002 and sponsored by Polycom since 2003. The Teachers’ Favorite Awards program started in 2006 and runs annually in May.”

The winners were decided by educators who took part in voting this spring; this year there were 445 votes from 29 U.S. states, plus the United Kingdom and Australia. Highest voting states were New York, Ohio, and Texas.

Polycom (remember that they sponsor the Berrien RESA-Polycom VC Content Providers Database) randomly awarded prizes to the people who participated in survey and provided their contact information. I think you may recognize one of the names on this list….!

Leave a Reply, Thanks! Cancel reply